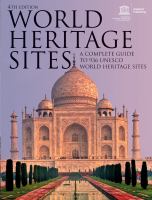 In 1959, UNESCO launched an international campaign to safeguard the world's most important cultural, natural and mixed sites, which led to the first World Heritage List. In clear text and photographs describing each site, this updated and revised edition of World Heritage Sites details all 936 sites on the list, including the 25 added in 2011.

Covering 153 countries, the World Heritage List is a valuable tool in the battle to preserve cultural and natural heritage. Its strict criteria mean only the most extraordinary and important sites make it onto the list, such as the Statue of Liberty, the Great Barrier Reef, the Historic Center of Vienna, Vatican City, the Bikini Atoll Nuclear Test Site, Robben Island, Ancient Damascus, and the Tower of London. At the same time, failure to maintain the criteria can result in being delisted, as was the Dresden Elbe Valley in 2009.

Some of the new sites added in 2011 and included in this book are:

The Heritage Sites are organized by the date they made the list. Not so easy to use.

There are no age suitabilities for this title yet.

There are no summaries for this title yet.

There are no notices for this title yet.

There are no quotes for this title yet.

Find it at Library